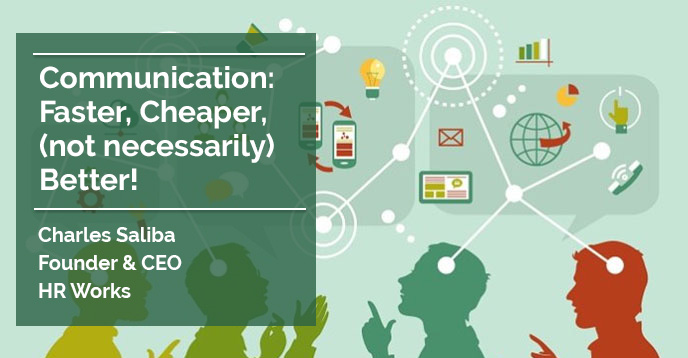 I am finding myself, lately, reflecting more and more on the subject of Human Communication, and specifically the buzz about how the evolution of technology is pouring into the interest of enhancing communication among people. Many are the examples that we witnessed in the past very few years that reveal the truthfulness of the above; Facebook, LinkedIn, Skype, and more recently, Viber, Tango, WhatsApp are nothing but a simple example of how much telecom engineers are eager to sustain Human Communication. This explosive innovation in the field of telecommunications primarily aimed at enabling People to communicate more, better, faster, and cheaper!

The reason of my reflection is not to contemplate the power of these new communication tools as nobody can deny the ingenious innovation revealed through such sophisticatedly engineered yet so user friendly tools. I rather would like to reflect on whether these tools are actually achieving the goal for which they were developed. Put simply, communication tools are created to render human communication More, Better, Faster, and Cheaper, so is this actually being realized?

Probably it is a settled argument that communication tools have indeed – and thankfully – made communication faster and cheaper; hence no need for considering this aspect in our context. What remains though is the question of whether these tools have made human communication better!

At a macro high level, and judging by what we are witnessing in terms of global conflict, intra and extra-Middle East, one would tend to say that communication among human beings is not getting better, rather it is getting worse! Still at the micro individual level, could it be getting better?

Let us reflect on life at the time when there was no Laptops, no Mobile Phones, no Internet, no Emails, no Skype, no iPhone, not anything of those; just a simple landline and mostly a Post Office. Was Human Communication then better or worse? My belief is that Communication then was more abundant and better. Now the reason for my belief might sound a bit oversimplified, but I guess that before all these communication means came around, people used to miss talking to each other; they looked forward to reaching out and communicate. Now with the abundance of communication tools, and the feel created inside each one of us that we can reach anyone on this globe anytime and at almost no cost, could have reinforced the sense where all of us took communication for granted.

Take this experiment for the sake of social science! Try to call ten people you know and count how many of them would actually pick the call on the spot. If you have above 50% success rate, congratulations, you fall within a highly active communication circle. My estimation is that a 50% success rate is very unlikely. Still, even if you try to send someone a WhatsApp text, or maybe an email, or a LinkedIn message you would also get varying results. What is the theme here?

Advanced communication might have led us to confuse between being able to contact any person any time, and the probability that that person will pick up! It’s true that all hi-tech communication tools enable us to call any time, but the decision to pick up is still the prerogative of the receiver! In other words, what I am trying to highlight here is that all modern communication tools remain mere hi-tech applications if they are not utilized appropriately and wisely by people. More communication tools surely indicate more effective and smooth means for communicating, but do not necessarily mean more quality communication among people.

Have you been in an Airport, a train, or a bus lately? Just try to recall how many people, men, women, kids, had their head held up? How many of those had their faces turned to the person beside them for a chat? How many were just sitting there with no device in their hands? Now, how much Human Communication is there in this scene? True that the person on the other side of the machine is a parent, friend or a colleague, but let’s think of it; how profound and clear can a dialogue be when it happens virtually; when key elements of the effective communication process, like body language, tone, and/ or voice are not secured? The question is: in going full throttle into communication technology tools are we compromising our competence for social interaction? Whatever happened to intellectually stimulating dialogues? Whatever happened to shrewdly smart conversations? Whatever happened to sarcasm, analytical discussions, and beautiful articulation of vocabulary?

Now many would consider my statement as undermining for all the ingenious minds who invested thousands of hours to bring the iPhone to our World, or a call for conventionalism, or even an attack on modernization. Well, it is neither of the above! All what I am trying to say here is that advanced communication technology might have made communication faster and cheaper, but it did not make it better, as Great Communication remains at the discretion of the individual Human Being and his level of intellect. 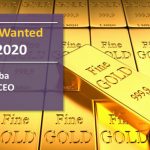 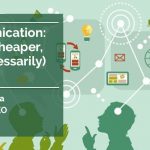